Fraser Corfield (1Mo) took on an epic challenge on Zwift last Saturday 27 February as he wanted to “do something good” to raise money for charity.  The challenge was to cycle the height of Everest (8848m) in one ride. He started at 5am on Saturday morning and finished 20 hours later – just after 1am on Sunday! Fraser was pedalling uphill for 18 hours and 21 minutes in total. He used the descents, to dismount, take comfort breaks, change clothes, and eat.

Only around 2600 people worldwide have completed the vEverest Challenge -and we think that he may be the youngest!

Already Fraser has raised £2750+ for four charities and his page remains open for another few months.  Fraser chose the charities he wanted to support as he felt they were relevant and important to him personally. He chose Cancer Research UK, the Scottish Malawi Partnership, Doddie Aid and NHS Charities.

Fraser was lucky enough to have many supporters joining him “virtually” on Zwift for portions of the ride. He also had friends visit and wave to him through the window when they were out for their daily exercise, helping to keep his spirits high. The support and encouragement he received was phenomenal with lots of people feeling inspired by his endeavours.

Fraser took it upon himself to write to several pro cyclists to seek their support. Mark Beaumont and Katie Archibald both responded, giving him some top tips on endurance cycling and nutrition. As well as passing on tips to Fraser, Mark Beaumont took some time out of his schedule to record a short video to congratulate all the pupils at Jordanhill School who are taking part in our Strava challenge. You can view the video here: https://youtu.be/ONopl7JvCtw

All at Jordanhill would like to congratulate Fraser on this incredible achievement. And of course for racking up some miles for the Interhouse Strava Challenge! 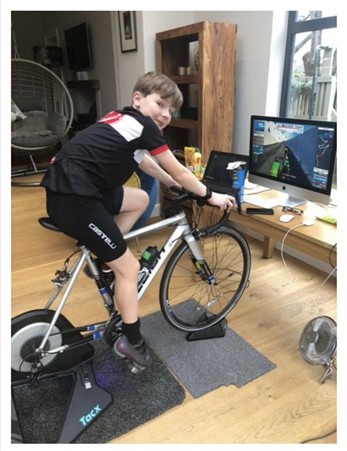